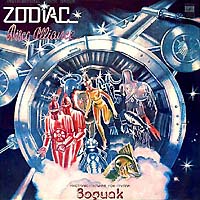 Instrumental cosmic-disco band Zodiac in the year 1980 made a huge sensation all over Soviet Union and satellite states, releasing their first LP "Disco Alliance". "DA" was a home grown answer to the popularity of european synth music in general and especially Didier Marouani's band SPACE.

This long play even now still is the most popular latvian album - if you look at the numbers of copies sold. It was a huge bomb on a soviet market, and what also helped it to sell better is the fact that soviet state release label MELODIA quite rarely offered anything as good as Zodiac. Foreign imports were expensive and didn't distribute through official channels, so the demand for Zodiac indicated an interest for serious and quality music from a common man.

Album was available thoughout all the USSR and accordingly to unofficial statistics, more than 20 million copies were sold in USSR, Japan, Austria, Finland and other countries.

First lineup of the band was the following: Janis Lusens, Andris Silis, Zane Griva, Andris Reinis and Ainars Ashmanis. These guys didn't think of popularity at all. The students from different departments and courses of Latvian Conservatory came to Riga from various small latvian towns and were peacefully studying, going to become experts in the field of academic music, which happened a bit later, too.

"We were not thinking about some kind of musical innovation," - says Janis Lusens, - "We were living a usual student life, playing various kinds of music in various bands. We were interested in electronics, exchanged LPs such as Tangerine Dream, Kraftwerk, Jean Michel Jarre. I was trying to compose something like that at home".

Demo cassette was brought to the producer Alexander Griva - one of the best sound producers in USSR, who worked with serious musicians and also was a deputy director of the Riga department of MELODIA at the moment.

Griva knew the party doctrine - in spite of harmless instrumentals on a record, using the costly studio time for some young semi-amateurs can't be appreciated by the government. However, it pushed its way through and Lusens and Co. were allowed to all the sacred cows of studio. All the instruments that were used on this record are listed on the backside of the cover. Lusens was fortunate enough to play "ARP Omni" and "ARP Odyssey".

Practically all the melodies of this record are well known by everyone who watched soviet TV channels in the 80s. In the early 2000s one of the tracks was covered by a techno project PPK (released on Perfecto) and in the year 2003 Zodiac played several tracks off "Disco Alliance" live in Moscow - first time after many year of silence.

You've probably noticed I don't publish much here. I have resumed posting to my old LiveJournal account - www.aulismedia.com, but I will continue writing music reviews here as well.

See you next time here.

This 1986 masterpiece from Alexey Kozlov and Co. flows with richly vivid soundscapes of electronic sounds and synths - mostly Soviet, as much as sound gives a hint.

Arsenal can hardly be named as a progenitor for russian/soviet electronic music, its more like an exception for the band to go into library music like this. Originally Kozlov is considered a highly rated jazzman and Pulse-3 is a colorful step beyond,
glorious burst of synth music. The record is a brilliant in the way that it uses musical progressions and soundscapes to create an effect of whatever needs to be expressed.

Soviet state release label "Melodia" established a release line of records "Pulse" aimed to create soundtracks for sports events and backing TV library music. It only became available for persons like Kozlov to do so when the party politics got warmer in the mid 80s - earlier he was a typical representative of cultural underground in the era of Stalin and Brezhnev.

This record is making pure synthesizer music. There's an interesting variety of synth sounds and sequences, but the entire album is pretty much one or two instruments aside from some jazzy sounds that can appear to be a beautifully processed wind instrument - a nice hello to stronger Kozlov's jazz background. There is no live percussion or voice to be found.

Of the 8 tracks on this EP, the title track "Estafeta" ("Relay Race") seems the most thought out and developed, however, the second one - "Rondo" - catches you next and one can find it's emotionally the deepest work to be found on the record.

All one of the pieces are quite attractive. They can be described as dated futurism or symbolism, holding a sort of romantic, nostalgic feeling for what was then deemed as the cutting edge. Despite being electronic, Pulse-3 is a very emotional set of songs. They have all the best qualities of a TV library soundtrack and all the power of kinds of sport they would correspond with.